How Hot Does a Fire Pit Get?

Whichever fire pit you are considering buying, you will quite naturally want to know if it is going to generate enough heat to make it worthwhile having in the first place. After all, there's no point in having an outdoor fire pit if the heat it produces is so low that everyone heads indoors instead.

One of the problems in assessing how much heat a fire pit might produce is the different types that are available and more specifically the different fuels that they can use too. The list of fuels includes wood, wood chips, smokeless coal, charcoal, and gases which include propane and fireplace ethanol.

Some of these are easier to assess in terms of their heat output than others, and often the manufacturers can state what the heat output will be. This is normally done with gas powered firepits, rather those which burn fossil fuels or wood.

If you were not already aware, heat output from firepits and similar products is measured in units called BTUs. BTU stands for British Thermal Unit, although its use is not limited to Britain. BTU is used around the world for categorizing many products such as air conditioning units, barbecue grills, water heaters, and in our case fire pits.

How Hot Does a Fire Pit Get?

Starting with fire pits that use bioethanol, these are likely to be more decorative products and are not really designed for outdoor use. They also tend to be smaller, therefore, the amount of fuel, the size of the flame, and thus the amount of heat generated is less than other types. You can expect these smaller fire pits to have a heat output of between 1,000 and 4,000 BTUs.

At this level, they will provide a reasonable amount of heat for indoors especially if you are using them to heat a room or create a cozy atmosphere. However, they would struggle to make you feel warm if used outdoors, especially on cold, chilly evenings.

The other type of gas that is used most for fire pits is propane. The appeals of propane firepits, compared to wood burning ones, are they are easier to light, the heat can be controlled, and there is little or no mess to clean up afterwards.

Manufacturers of propane fueled fire pits normally advertise their rating to try to outscore their competitors. At the lower end of the scale, there are propane fire pits which produce just 10,000 BTUs. These tend to be decorative fire pits, where the emphasis is as much on the style of the product, as it is on the heat it can generate.

These fire pits blast out an enormous amount of heat which is generated from the flames fueled by the propane gas, and as time passes the heat also builds up in the lava or glass rocks which these types normally have in their fire bowl. These provide latent heat even after the flame has been switched off.

While you will be given the specification of propane fire pits, with fire pits using wood it is highly unlikely that a manufacturer will specify what heat their product will produce. The reason for this is that there are so many variables that will affect the heat that is produced from wood-fueled fire pits, that any figure would be meaningless.

What we can do is make use of the data that exists relating to the temperature wood fires reach, and then make a sensible estimation of what heat a wood-fueled fire pit might produce.

With a fire pit which is using wood as its main fuel, you can expect it to reach higher temperatures than gas ones. There are two types of heat at play when wood burns. The first is the flames which are produced as the wood is burning, and there is the radiant heat from the glowing logs and embers.

The temperature that wood reaches when it is burning can be over 1,000° Fahrenheit and heat output can easily reach over 100,000 BTUs. This will be influenced by the size of the fire bowl in which the wood is burning, as the bigger this is, the hotter the fire will be.

Very importantly the amount of air than can flow around the fire will also influence the heat levels. The higher the airflow, the greater the heat output, therefore a fire pit sitting in the middle of a garden is likely to produce more heat than one in the corner of a yard.

How to Measure Fire Pit Temperature

The Mestek IRO1C Infrared Thermometer is an easy-to-use, portable, and high-performing device that you can use for a variety of purposes. You can safely measure extreme temperatures ranging from -58°F (-50°C) to 1022°F (550°C) without the need to come in contact with the object. This is perfectly practical for both indoor and outdoor use. 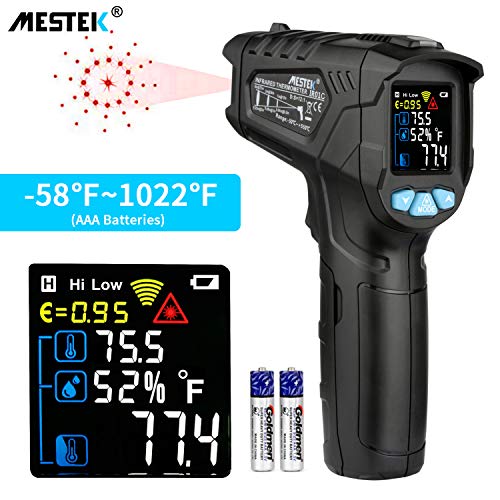 You can measure accurate temperatures in:

In addition, this infrared thermometer is handy for other hard-to-reach areas for repair and maintenance. Its adjustable emissivity also allows for better accuracy when measuring temperatures on different surfaces. This well-designed thermometer comes with a quick response time of less than half a second, giving you quick and accurate measurements in no time at all.

The best feature of this infrared thermometer is that you can take extreme temperatures from a very safe distance, without the threat of getting harmed. The super-clear colored LED screen also makes it easy to check the temperature. It also comes with a low battery indicator, so you know when you need a new battery.

Practically, there are no major issues with this thermometer temperature gun; however, you must be careful not to point the laser on exposed skin. 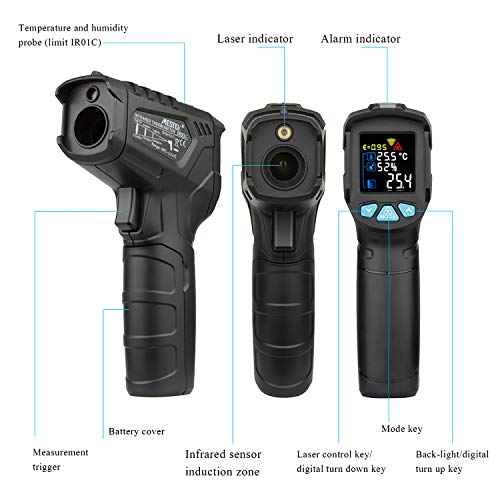 No matter which fire pit you choose, we would advise you to get your hands on the IRO1C, the well-designed infrared thermometer temperature gun by Mestek, to get the most reliable temperature measurements. This device can be used indoors or outdoors, depending on your needs.

Simply put, how hot a firepit gets depends on the type of fire pit you have and the fuel you are using. However, the best way to measure the temperature is to use a quality temperature gun like the IRO1C.

What to Put Under a Fire Pit on Grass?

How to Light Firewood in a Fire Pit

What to Put Around a Fire Pit: Guide...

Can You Use Glass Marbles in Fire Pits...

What to Do With Ashes From Fire Pit?

Can You Place a Fire Pit on Timber...

Best Propane Fire Pits for a Nice and...

Here at Zeus Fires we are passionate about Fire Pits and are here to help you find the best products.
All of our Articles are fully researched by our team of writers so you get the best information available, enabling you to make informed buying decisions.

This website uses cookies to improve your experience. We'll assume you're ok with this, but you can opt-out if you wish. Accept Read More