Top Posts
Best Tabletop Fire Pit of 2020: Top Recommendations
Best Chairs for Around a Fire Pit: 2020’s...
How to Light Firewood in a Fire Pit
What to Put Around a Fire Pit: Guide...
Do I Need a Burn Permit for a...
Can You Use Glass Marbles in Fire Pits...
What to Do With Ashes From Fire Pit?
Halloween Fire Pit Ideas
Solo Stove Bonfire Fire Pit Review
Best Fire Pit Tables: Affordable Additions to Your...
Home Fire PitsFire Pit Advice Can You Burn Coal in a Fire Pit?
Fire Pit AdviceFire Pits

Can You Burn Coal in a Fire Pit?

When this question gets asked, it normally needs to be qualified by asking back, 'What sort of coal are you referring to?’ The reason for this is that some people mean traditional coal, some mean smokeless coal, and others are talking about charcoal of the sort that gets used on barbecue grills.

This leads us to point out that there is a myriad of different fuels that can be used to fuel fire pits, with coal (of whatever type) being just one of them. Each fuel has its benefits, and they also all have their negative points too. These will generally lead to the person considering them to choose a particular fire pit model that can use the fuel which best fits their needs.

For people who want the minimum cleanup afterwards, a gas-fueled fire pit will be their first choice. The first of these gases is bioethanol which is used in decorative fire pits and those that can be used indoors. The other gas is propane which you will find used in larger fire pits and those used outdoors. Find the best outdoor fire pits: Outdoor Fire Pit Reviews.

Gas firepits also tend to be more expensive to buy and to run too. After the initial cost, you then must purchase the gas, and, in some models, this burns off very quickly, so the cost of using it can soon add up.

Wood fueled fire pits are the most popular and generally the cheapest to buy, with some products costing less than $50. Compare that to a gas fire pit that starts from over $100 and can go well above $1000. The other cost benefit is that wood for the fire pit can be obtained by simply wandering around your local woods and picking up fallen twigs and branches.

On the negative aspect of wood-fueled firepits, you do have more work to do in terms of getting it lit, and afterwards, you have the cleaning up to do, such as disposing of the ashes safely.

This brings us to the burning question (sorry) regarding using coal. Generally, those fire pits which have been designed to use wood as their fuel will also be suitable for coal too. If you think about a fireplace that you might find in a house, that is capable of being fueled by both wood and coal, and a fire pit works on the same principle.

However, we must point out that it is very unlikely that you would want to use traditional coal like the sort brought out of mines. This generates a lot of smoke and you are very likely to draw the anger of your neighbors if you start sending sooty plumes of black smoke into the local atmosphere.

The most common alternatives are either smokeless coal or charcoal. In both cases, you will likely be using some kindling such a brush or twigs to get the fire started. It is also common for wood to be used in conjunction with these coals especially if the appeal of the fire pit extends to watching the flames as the wood burns.

Smokeless coal is not the sort of coal you normally associate with being dug from a mine, however many of the materials it contains are. It is a manufactured material, which contains many naturally occurring components, such as anthracite.

Anthracite is also known as 'hard coal' and it has a very high carbon content. When it is burning in a fire pit the flames it produces give off very little smoke; therefore, they are ideal for keeping the air clean.

Charcoal can also be used in fire pits, in just the same way you would use it in a barbecue. You will note that when you use charcoal for cooking barbecue food there is not a great deal of smoke and that is the same for when it is used in a fire pit. Again, many people use charcoal in conjunction with wood so that there are flames burning from the wood and residual heat, which will emanate from the charcoal as it burns.

This all-natural hardwood lump coal from Jealous Devil is a fantastic choice for a fire pit that won’t annoy your neighbors. 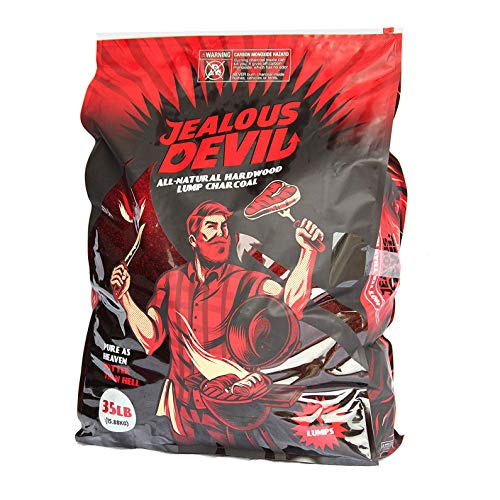 The superior quality material means that no smoke is produced.

This restaurant-quality coal won’t send sparks flying everywhere either, which will go a long way in protecting your deck or lawn.

It creates smaller amounts of ash compared to other materials you can burn, which is great when it comes to cleaning up the fire pit afterward too! 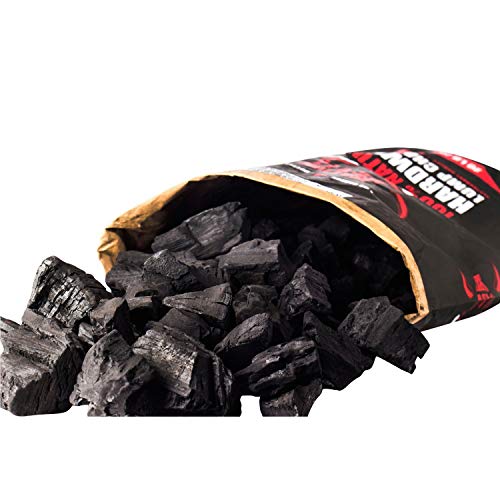 Jealous Devil Hardwood Lump Coal is 100% all-natural hardwood from South America, meaning it doesn’t have any nasty chemicals in it for you to breathe in.

100% hardwood lumps also mean no fillers and no scrap pieces of wood to fill up the bag.

This coal offers fantastic value for money as it burns twice as hot as traditional coal, and three times as long.

Enjoy a warmer fire pit, for longer, without having to use too much coal.

Burning coal doesn’t produce flames like wood, though, so, if you’re hoping to watch flames dance, then maybe you could use this coal as a base for the heating element. 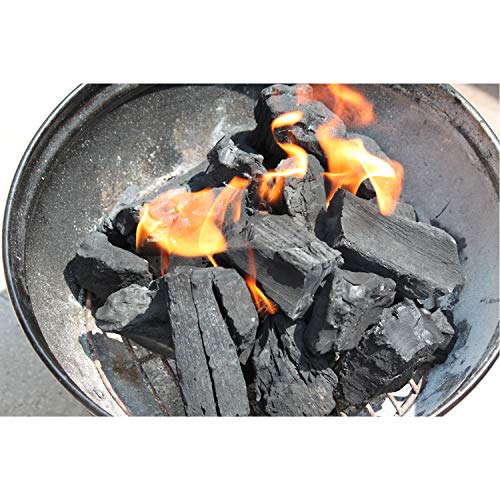 If you’re cooking over your fire pit, then the cooking heat this coal produces is a massive 7,000cal/g.

The smooth and mildly smokey flavor won’t overpower your food, and it will work great in a smoker too.

You may want to experiment a little by trying different combinations of wood and smokeless coals or charcoal to see which provides the most satisfactory level of heat and ambience for you.

How to Light Firewood in a Fire Pit

What to Put Around a Fire Pit: Guide...

Can You Use Glass Marbles in Fire Pits...

What to Do With Ashes From Fire Pit?

Can You Place a Fire Pit on Timber...

Best Propane Fire Pits for a Nice and...

Will we get aroma of burning anthracite and/ or Jealous Devil coal? I love that aroma and is the only reason I want to burn coal.

Hi John,
No I’m afraid not, it’s a mild neutral aroma.
The hard coal (from Pennsylvania) that you are referring to is in short supply these days.
Chris

Here at Zeus Fires we are passionate about Fire Pits and are here to help you find the best products.
All of our Articles are fully researched by our team of writers so you get the best information available, enabling you to make informed buying decisions.

This website uses cookies to improve your experience. We'll assume you're ok with this, but you can opt-out if you wish. Accept Read More